The law of diminishing returns is a well known concept in economics. Highly simplified, it states that as you invest more, the overall return on investment increases at a declining rate. I wondered if this principle applies to biomedical research.

Few scientists – if any – will be surprised to see that the rate of publication and the number of active publishing scientists have increased exponentially. However, it is slightly disconcerting that the number active authors doubles every 17 years whereas the number of papers per year doubles only every 22 years. 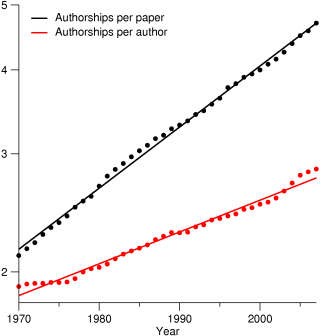 A more direct way to show this is to plot the ratio between the number of papers published each year and the number of authors on them (note that the y-axis does not start at zero):

The fact is that the number of papers produced per researcher per year has dropped by roughly one third since 1970. However, there could be many reasons for this:

My guess is that the last three reasons all play important roles. What do you think?

5 thoughts on “Analysis: The law of diminishing returns”