In 2006 the Schultz lab at the Scripps Research Institute published a paper in PNAS called “Genome-wide functional analysis of human cell-cycle regulators”. The abstract reads:

Human cells have evolved complex signaling networks to coordinate the cell cycle. A detailed understanding of the global regulation of this fundamental process requires comprehensive identification of the genes and pathways involved in the various stages of cell-cycle progression. To this end, we report a genome-wide analysis of the human cell cycle, cell size, and proliferation by targeting >95% of the protein-coding genes in the human genome using small interfering RNAs (siRNAs). Analysis of >2 million images, acquired by quantitative fluorescence microscopy, showed that depletion of 1,152 genes strongly affected cell-cycle progression. These genes clustered into eight distinct phenotypic categories based on phase of arrest, nuclear area, and nuclear morphology. Phase-specific networks were built by interrogating knowledge-based and physical interaction databases with identified genes. Genome-wide analysis of cell-cycle regulators revealed a number of kinase, phosphatase, and proteolytic proteins and also suggests that processes thought to regulate G1-S phase progression like receptor-mediated signaling, nutrient status, and translation also play important roles in the regulation of G2/M phase transition. Moreover, 15 genes that are integral to TNF/NF-κB signaling were found to regulate G2/M, a previously unanticipated role for this pathway. These analyses provide systems-level insight into both known and novel genes as well as pathways that regulate cell-cycle progression, a number of which may provide new therapeutic approaches for the treatment of cancer.

I recently wrote a commentary about how phenotypes in yeast agree remarkably well with the just-in-time assembly hypothesis for cell-cycle regulation of protein complexes. I thus decided to also compare the dataset on cell-cycle phenotypes for human genes with the cell-cycle microarray expression data published in 2002 by Whitfield and coworkers.

Using the mapping files from the STRING database, I was able to automatically map 741 of the 1152 genes with cell-cycle phenotypes to the set of 12,097 genes for which we have cell-cycle microarray expression data. Of the 741 genes, 55 are among the a of 600 periodically expressed genes identified in a reanalysis of the data from Whitfield and coworkers. This is just shy of 50% more than what would be expected by random chance (P < 0.001; Fisher’s exact test).

The authors divided the cell-cycle mutants into eight classes. Repeating the above analysis for each of these categories separately revealed that genes with phenotypes related to S-phase and cytokinesis were significantly overrepresented among the 600 periodically expressed genes (FDR < 0.05; Fisher’s exact test and Benjamini-Hochberg correction for multiple testing). The other categories did not yield statistically significant results.

To look at the temporal regulation of transcription in more detail, I plotted the distribution of peak times (the point in the cell cycle when a gene is maximally expressed) for the periodically expressed genes from each of the eight phenotypic categories: 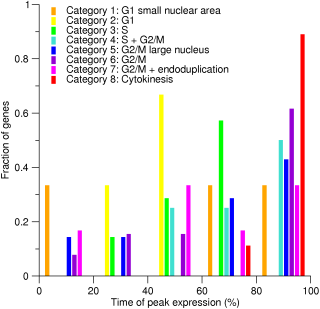 In summary, these results support the view that cell-cycle-regulated genes are expressed shortly before their time of action, despite the fact that regulation also takes place at the protein level. It also confirms that many genes with cell-cycle function are not subject to transcriptional cell-cycle regulation.