In relation to an entirely different analysis than the one I will describe here, I downloaded the protein half-life data for budding yeast that was published in PNAS by the O’Shea lab about two years ago:

Quantification of protein half-lives in the budding yeast proteome

A complete description of protein metabolism requires knowledge of the rates of protein production and destruction within cells. Using an epitope-tagged strain collection, we measured the half-life of >3,750 proteins in the yeast proteome after inhibition of translation. By integrating our data with previous measurements of protein and mRNA abundance and translation rate, we provide evidence that many proteins partition into one of two regimes for protein metabolism: one optimized for efficient production or a second optimized for regulatory efficiency. Incorporation of protein half-life information into a simple quantitative model for protein production improves our ability to predict steady-state protein abundance values. Analysis of a simple dynamic protein production model reveals a remarkable correlation between transcriptional regulation and protein half-life within some groups of coregulated genes, suggesting that cells coordinate these two processes to achieve uniform effects on protein abundances. Our experimental data and theoretical analysis underscore the importance of an integrative approach to the complex interplay between protein degradation, transcriptional regulation, and other determinants of protein metabolism. 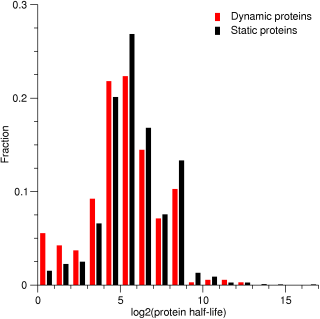 I next tested if the half-life of the dynamic proteins varies during the cell cycle by make scatter plot of the protein half-life as function of the time of peak expression for the corresponding mRNA:

There appears to be no correlation. Together, these analyses indicate that dynamic proteins have shorter half-lives than static proteins, irrespective of when in the cell cycle they are expressed.