About half a year ago, I began experimenting with Second Life as a tool for virtual conferences (I should add that my experiences have since improved). However, I believe that imitating real life in a virtual world is not necessarily the best way to use the technology – it may be better to use virtual reality for doing the things that are difficult to do in the real world. A good example of this is Hiro’s Molecule Rezzer, which is one of the best known scientific tools in Second Life. It, and its much improved successor Orac, allows people to easily construct molecular models of small molecules in Second Life.

After speaking with several other researchers in Second Life, who like I are interested in evolution, I set out to build a similar tool for visualization of phylogenetic trees. The result is SLIDR (Second Life Interactive Dendrogram Rezzer), which based on a tree in Newick format constructs a dendrogram object. The first version of SLIDR can handle trees both with and without branch lengths; however, I have not yet implemented support for labels on internal nodes or for bootstrap values.

The picture below shows an example of a dendrogram that was automatically generated by SLIDR based on a Newick tree: 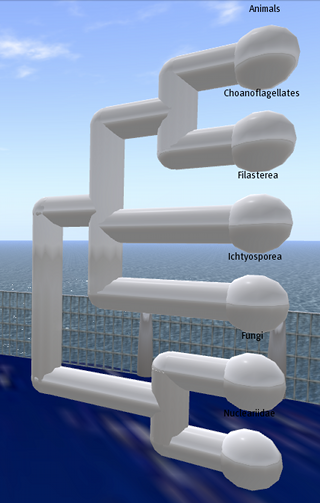 There is a bit more to SLIDR than this, though. After the dendrogram has been built, it can be loaded with a photo and/or a sound for each of the leaf nodes. When click on a node, the corresponding sound will be played and the photo will be shown on the associated screen (the white box in front of which I stand):

I plan to work with collaborators in Second Life to construct dendrograms for evolution of bats (including their echolocation sounds and photos of the animals) and for the fully sequenced Drosophila genomes. Please do hesitate to contact me if you would like to use SLIDR on another project. I intend to make SLIDR available as open source software once I have implemented support for the full Newick format.