Sometimes the proteins or small molecules that you search for may not be immediately shown by STITCH. To find what you are looking for you may have to extend the network.

Thymidine is required for DNA replication and repair to take place, and inhibition of thymidine synthase is thus harmful to proliferating cells. Indeed, most of the small molecules in the network are drugs used for chemotherapy.

The data set consists of 20 different article level metrics. However, some of these are very sparse and some are partially redundant. I thus decided to filter/merge these to create a reduced set of only 6 metrics:

Calculating all pairwise correlations among these metrics is obviously trivial. However, one has to be careful when interpreting the correlations as there are at least two major confounding factors. First, it is important to keep in mind that the PLoS article level metrics have been collected across several journals. Some of these journals are high impact journals such as PLoS Biology and PLoS Medicine, whereas others are lower impact journals such as PLoS ONE. One would expect that papers published in the former two journals will on average have higher values for most metrics than the latter journal. Papers published in journals with a web-savvy readership, e.g. PLoS Computational Biology, are more likely to receive blog posts and social bookmarks. Second, the age of a paper matters. Both downloads and in particular citations accumulate over time. To correct for these confounding factors, I constructed a normalized set of article level metrics, in which each metric for a given article was divided by the average for articles published the same year in the same journal. 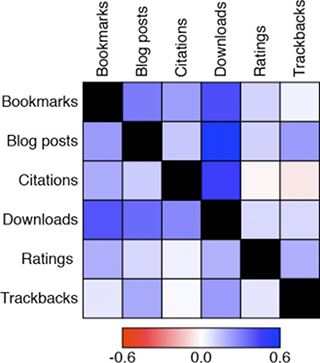 There are a several interesting observations to be made from this figure:

Finally, I will point out one additional metrics that I would very much like to see added in future versions of this data set, namely microblogging. I personally discover many papers through others mentioning them on Twitter or FriendFeed. Because of the much smaller the effort involved in microblogging a paper as opposed to writing a full blog post about it, I suspect that the number of tweets that link to a paper would be a very informative metric.

Edit: I made a mistake in the normalization program, which I have now corrected. I have updated the figure and the conclusions to reflect the changes. It should be noted that some comments to this post were made prior to this correction.

At the Novo Nordisk Foundation Center for Protein Research we are looking for a scientist to provide bioinformatics support for the Protein Production Unit. For further details, please see the job advert below the fold.
END_OF_DOCUMENT_TOKEN_TO_BE_REPLACED

I admit that this may seem a strange question. One is a microblogging platform that allows you read and write messages of at most 140 characters. The other is a 3D virtual world. They are, however, both communication tools, and I think there is a completely different reason why Twitter is so much more useful to me than Second Life is.

By contrast, if I go to the Second Life web site and log in, I see this:

It is not Second Life. It is a complex web interface that gives me access to account administration tools and shows me lists of blog posts by Linden lab, comments from Second Life users, items for sale on Xstreet SL, and video tutorials. In the lower left corner it shows me the only really useful information, namely which of my friends are online. That is, the friends that I would have been able to chat with, had I been in Second Life and not on the web site, which does not allow you to read or write messages.

Imagine if the web interface of Second Life would instead show me this: 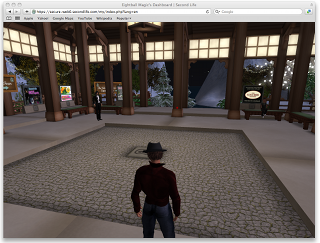 It would be Second Life. It would immediately show me the main content: the virtual world. It would also allow me to interact with the content, that is to move around, to chat with people, and even to create content. Do you think Second Life would have more users if it would run inside your web browser? I think so. Linden Lab is and has been focusing on improving the initial user experience in Second Life to improve the retention rate (i.e. the fraction of new users that continue to come back). I am not saying that this is not important, but I think that most of the potential users are lost long before they even get into the virtual world.

This is by no means a problem that is specific to Second Life. Today, asking users to install a piece of software on their computer will cause the majority of people to shy away before they have tried your product. Even just asking users to create an account will cause many to turn around and walk away. When it comes to social networks, the decisive factor is users. If your friends are not there, why should you? Imagine a virtual world that would run in your web browser and which you could sign into using OpenID, Twitter Connect, or Facebook Connect. Would your friends be there? Would you?