In the four previous blog posts I introduced the GreenMamba framework (download) and showed how it can be used to turn a simple tab-delimited files or command-line tools into web resources with a bare minimum of effort. In this post I will show how easy it is to configure multiple databases or tools to run under the same Mamba server and how to make them accessible as a single web resource.

To illustrate this, I will take the Instances database and the Motifs tool and turn them into a web resource called ELM (the name of the database from which the instance data and motifs were obtained in the first place). The following inifile is all it takes to do so:

The [SERVER] section is exactly as in all the previous examples, instructing the Mamba server to run on localhost port 8080 and to import the GreenMamba plugin. The [Instances] section configures a simple database called Instances based on the tab-delimited file instances.tsv, and the [Motifs] section configures a web tool called Motifs that runs the Perl script motifs.pl. These two sections are unchanged compared to the previous blog posts and have here simply been put into inifile, which is how one hosts multiple databases or tools under the same Mamba server. The last section, [ELM], is the only new part. It instructs GreenMamba to configure a metatool called ELM that combines the two tools Motifs and Instances.

Starting the Mamba server with this inifile and accessing http://localhost:8080/HTML/ELM yields the following web interface: 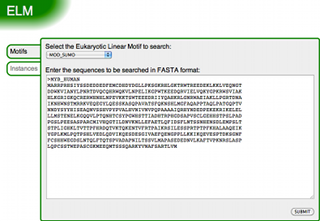 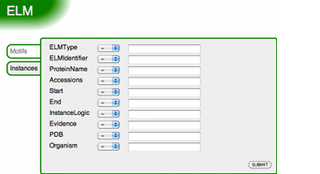 If you press the submit button for Motifs or Instances, you will get output that is formatted as it was when using Motifs and Instances as separate resources, the only change being that the header says ELM. In the next blog post, I will show how the design of GreenMamba web resources can be further customized and how design changes are consistently applied throughout all the individual tools that make up the metatool.