It is my great pleasure to announce the 2nd Copenhagen Bioscience conference “PTMs In Cell Signaling”, which will take place in Helsingør, Denmark on December 3-5, 2012. 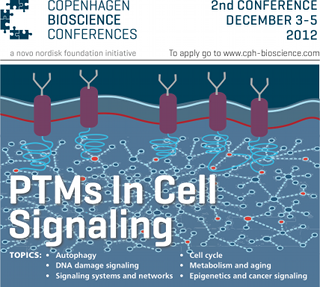 The conferences is limited to 220 participants. It is fully sponsored by the Novo Nordisk Foundation who covers the conference fee, hotel, transport and meals during the conference. Participants cover their own travel expenses.

To find out more, please check the conference web site.

I have long used a data integration approach to obtain a global picture of eukaryotic cell-cycle regulation. The cell cycle is a popular research topic in part because of its importance for cancer research. I thus recently compared microarray expression data on the human cell cycle to genes with mutations that have been causally implicated in various forms of cancer.

From the Cancer Genome Project website, I downloaded a list of 353 human genes that are implicated in cancer. Using the identifier mapping file from STRING, I was able to automatically map 338 of these genes to the set of human genes from Ensembl that I used in earlier cell-cycle studies. 295 of the 338 genes were present on the microarrays used in the cell-cycle expression study by Whitfield et al. (2002). However, only 23 of these are among the 600 periodically expressed genes identified in the reanalysis by Jensen et al. (2006). The many numbers are illustrated in the diagram below:

By random chance, 295*600/12097 = 15 of the 295 genes would be expected to be periodically expressed, and the enrichment is thus only a bit over 1.5 fold. Although this enrichment is statistically significantly (P < 3%, Fisher’s exact test), the correlation is clearly not strong enough to allow prediction of novel cancer genes.

In summary, it seems that one cannot say much about cancer based on cell-cycle mRNA expression data. This is perhaps not surprising considering that the transcriptional regulation does not seem to vary much between cancer cells and normal cells.

The groups of Ziv Bar-Joseph and Itamar Simon recently published a paper in PNAS on a new microarray study of the cell cycle of primary human fibroblasts:

Characterization of the transcriptional regulatory network of the normal cell cycle is essential for understanding the perturbations that lead to cancer. However, the complete set of cycling genes in primary cells has not yet been identified. Here, we report the results of genome-wide expression profiling experiments on synchronized primary human foreskin fibroblasts across the cell cycle. Using a combined experimental and computational approach to deconvolve measured expression values into ‘‘single-cell’’ expression profiles, we were able to overcome the limitations inherent in synchronizing nontransformed mammalian cells. This allowed us to identify 480 periodically expressed genes in primary human foreskin fibroblasts. Analysis of the reconstructed primary cell profiles and comparison with published expression datasets from synchronized transformed cells reveals a large number of genes that cycle exclusively in primary cells. This conclusion was supported by both bioinformatic analysis and experiments performed on other cell types. We suggest that this approach will help pinpoint genetic elements contributing to normal cell growth and cellular transformation.

In contrast to the earlier study by Whitfield et al. (2002), which was performed on HeLa cells, Ziv Bar-Joseph et al. worked on non-transformed fibroblasts. The dataset thus offers a first global view of the differences between the cell cycle of normal human cells and that of cancer cells.

To compare their list of cell-cycle-regulated human genes to the one the I have used so far, I mapped their 480 genes to Ensembl using the mapping file from the STRING database. This resulted in a list of 410 genes, that is 70 genes could not be mapped by the automatic procedure. Whereas this is far from a perfect mapping, it is sufficient to judge the quality of the list.

The plots below show the fraction of a benchmark set that is identified as function of the number of genes that is proposed to be periodically expressed during the cell cycle. In each plot, I compare the results for the list of 410 obtained from the new study by Bar-Joseph et al., the analysis by Whitfield et al., and the reanalysis of the latter dataset by Jensen et al. (2006) (available from Cyclebase.org). To make the comparison as fair as possible, I only considered the subset of genes that were present in both microarray designs. The first plot uses as benchmark a set of 63 genes that have been identified as periodically expressed in targeted small-scale studies: 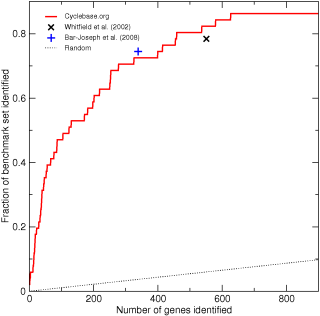 I also benchmarked the three gene lists against a second benchmark set, which consists of predicted target genes of E2F cell-cycle transcription factors: 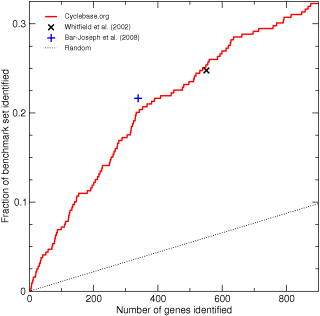 Both benchmarks suggest that the three lists are of very comparable quality, but that the list by Whitfield and coworkers is much more inclusive than the one from Bar-Joseph and coworkers. In other words, the former list has better sensitivity whereas the latter has better specificity. This is consistent with the results presented by Bar-Joseph et al., who conclude that their list is more reliable than the previously published list. However, this is probably not due to better quality of the raw expression data, since reanalysis of the data by Whitfield et al. yielded a list with almost identical sensitivity and specificity (that is the red curve is very close to the blue cross in both plots).

Although the two lists of periodically expressed are of comparable quality, they may still contain very different sets of genes. I therefore decided to compare the list of genes that are periodically expressed in the time course on primary fibroblasts and in each of the four time courses on HeLa cells. To make this comparison as easy as possible, I selected the top-364 cycling genes from each of the four HeLa time courses based on the reanalysis by Jensen et al. (2006). The ten Venn diagrams below show all pairwise comparisons of the five lists of 364 genes each: 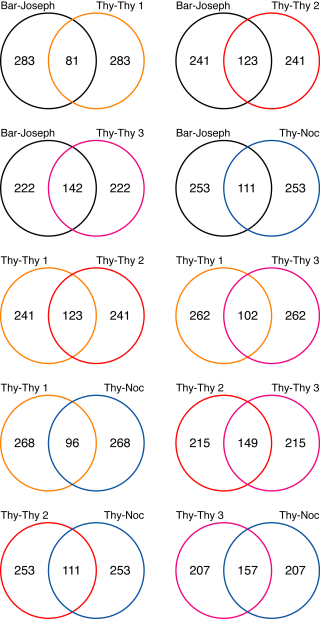 The average overlap between the list by Bar-Joseph et al. and an experiment from Whitfield et al. is 114 genes. By comparison, the average overlap between the top-364 lists from two individual experiments from Whitfield et al. is 123 genes. Although the overlap may seem low, I thus believe that it is due to the poor reproducibility between microarray time courses rather than due to genuine differences between primary fibroblasts and HeLa cells as suggested by Bar-Joseph and colleagues.

Although cancer cells have to circumvent the regulatory mechanisms that would normally prevent cell proliferation, the cell cycle itself appears to function the same way as in normal cells. In other words, the difference does not lie in the “engine” but in the “brakes”, which have been sabotaged in cancer cells.