The aim of this practical is to introduce you to the concept of web services as well as to a few useful standard command-line tools and how one can pipe data from one tool into another. Web services are, simply put, websites that are meant to be used by computers rather than humans.

Fetching a URL from the command line

Submitting text to the tagger

In the NER practical, you used the a web service for NER; however, the complexity was hidden from you in the EXTRACT bookmarklet. The way the bookmarklet works, is that it sends text from your web browser to a remove tagging web service and subsequently displays the results.

Let us start by looking behind the curtain and see how an EXTRACT popup is produced. When selecting the the header of the article and clicking the bookmarklet, your browser retrieves the following page to show in the popup:

As you can see, the URL contains data, namely the text to be tagged as well as information on which types of named entities we want to have recognized in the text.

You can retrieve the same information in a tab-delimited format, which is far more useful for computational purposes:

If you want, you can use the curl command to retrieve the same data from the command line.

Bioinformatics web services are not limited to text mining. For example, the STRING database of protein interactions can also be accessed as a web service. The following URL gives you an interaction network for BCL11B as an image:

Modifying it just slightly, allows you to retrieve the same interactions in PSI-MI-TAB format:

http://string-db.org/api/psi-mi-tab/interactions?identifier=ENSP00000349723
You obtain the exact same data in the command line by running this command:

Putting it all together

Using pipes, it is possible to put together multiple different web services and local programs to accomplish complex tasks. Here is an example that puts together everything you have learned above:

Let us pick apart this monstrosity of a command and see what it does:

In other words, with a single pipe of commands that interacts with three different servers we manage to retrieve a full-text article, perform named entity recognition of human proteins and obtain protein interactions among them. Note that whereas this is possible, it will often be desirable to store some of the intermediate results in files instead of using pipes.

By slightly modifying the command, it is possible to instead retrieve this as an image: 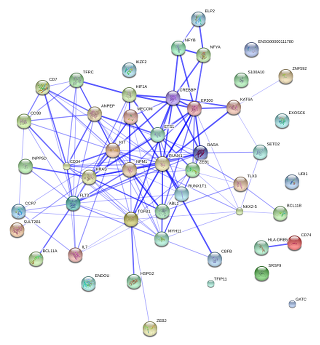 In this practical, you will be using a newly developed tool EXTRACT, which shares many parts with the better known tool Reflect. Unlike ABNER, these tools identify named entities by matching a large dictionary against the text.

For this exercise, please install the pre-release version of EXTRACT2 into your web browser’s bookmark bar. If you have problems, e.g. enabling the bookmark bar in your browser, please check the FAQ.

Open in your web browser both the abstract and the full-text version of the article “Novel ZEB2-BCL11B Fusion Gene Identified by RNA-Sequencing in Acute Myeloid Leukemia with t(2;14)(q22;q32)”. Run EXTRACT on both and inspect the results. You can find more details by either click on an annotation or by selection a text region and clicking the bookmarklet again.

In this practical, you will be using the well-known tool ABNER, which relies on a statistical machine-learning method called conditional random fields (CRFs) to recognize entities in text.

To install ABNER, simply download abner.jar from the website. To run it, either double-click on the jar file or type java -jar abner.jar on the command line). As ABNER is a Java program, it requires that you have Java installed on your computer. If not, you need to also download the installer and install it. If you use a Mac, you likely need to go to System Preferences and then Security & Privacy to allow ABNER to be run.

Retrieve the title and abstract of the publication “Novel ZEB2-BCL11B Fusion Gene Identified by RNA-Sequencing in Acute Myeloid Leukemia with t(2;14)(q22;q32)” from PubMed. Use ABNER to annotate named entities according to both the NLPBA and BioCreative probabilistic models models.

In this exercise you will be processing two sets of documents on prostate cancer and schizophrenia, respectively. You will use a program called tagdir along with a pre-made dictionary of human protein names to identify proteins relevant for each disease and to find a protein that links the two diseases to each other.

The software and data files required for this exercise is available as a tarball. You will need to know how to compile a C++ program to run this exercise; also, the C++ program requires Boost C++ Libraries.

How to run the tagger

To execute the tagger program, you need to run a command with the following format:

The argument dictionary_file should be the name of a tab-delimited file containing the dictionary of names to be tagged in the text. For this exercise you will always want to use the file human_proteins.tsv.

The argument blacklist_file should be the name of a tab-delimited file containing the exact variants of names that should not be tagged despite the name being in the dictionary. To tag every variant of every name, you can simply use an empty file (empty.tsv), but you will also be making your own file later as part of the exercise.

The argument documents_directory should be the name of a directory containing text files with the documents to be processed. For this exercise two such directories will be used, namely prostate_cancer_documents and schizophrenia_documents.

Finally you give a name for where to put the tab-delimited output from the tagger (matches_file). You can call these files whatever you like, but descriptive names will make your life easier, for example, prostate_cancer_matches.tsv.

When running the tagger on one of the two directories of documents, you should expect the run to take approximately 2 minutes.

The tagger program requires the input to be in very specific formats. The dictionary_file must be a tab-delimited file that looks as follows:

The first column must be a number that uniquely identifies the protein in question. In human_proteins.tsv the numbers used are the ENSP identifers from Ensembl, with the letters ENSP and any leading zeros removed. The second column is a name for the protein. If a protein has multiple names, there will be several lines, each listing the same number (i.e. the same protein) but a different name for it.

The blacklist_file must similarly be a tab-delimited file in which each line specifies a specific variant of a name and whether it should be blocked or not:

The letter “t” in the second column means TRUE (i.e. that the variant should be blocked) and “f” means FALSE (i.e. that it should not be blocked). The file above would thus block ACP, ACS, and act but not ACTH and activin. Because variants are by default not blocked, you in principle only need to add lines with “t”; however, the lines with “f” can be very useful to keep track at which variants you have already looked at and actively decided not to block, as opposed to variants that are not blocked because you have not looked at them.

The output of the tagger is also tab-delimited, each line specifying a possibly meaning of a match in a document:

The first column tells the name of the file (the numbers are in our case the PubMed IDs of the abstracts). The next two columns specify from which character which character there is a match. The fourth column shows which string appeared in that place in the document. The fifth column specific which protein this could be (i.e. the Ensemble protein number). The first line in the output above thus means that the document 7478532.txt from character 254 to character 256 says TSG, which could mean the protein ENSP00000262120. The second line shows that it alternatively could be ENSP00000416324.

As you will see if you run the tagdir using an empty blacklist_file, a simple dictionary matching approach leads to very many wrong matches unless it is complemented by a good list of name variants to be blocked.

To identify potential name variants that you might want to put on the black list, you will want to count the number of occurrences of each and every name variant in an entire corpus of text. A very helpful UNIX command for doing this based on a matches_file (produced by tagdir) is:

What it does is first cut out the exact name variants in column 4 of your matches file (cut -f 4), sort them so that multiple copies of the same variant will be right after each other (sort), count identical adjacent lines (uniq -c), sort that list reverse numerical so that the highest counts come first (sort -nr), and show the resulting in a program so that you can scroll through it (less).

Once you have produced a blacklist, you can rerun the tagdir command and you will get much less output because vast numbers of false positive matches have been filtered away. You will find that adding just the worst few offenders to the blacklist will help much; however, as you go further down the list the effort spent on inspecting more names gives diminishing returns.

Finding proteins associated to a disease

Making a very good blacklist would take too long for this exercise. For the following exercise it is thus recommended that you use the provided file blacklist_10.tsv, which we have provided.

The goal is now to produce a top-20 list of proteins that are most often mentioned in papers about prostate cancer. To achieve this, you need to rerun the tagging of human proteins in the prostate cancer documents, making use of the above mentioned blacklist. To extract a top-20, you can use a command similar to the one used for create the list of most commonly appearing name variants.

Find a protein linked to both diseases

Sometimes the proteins or small molecules that you search for may not be immediately shown by STITCH. To find what you are looking for you may have to extend the network.

Thymidine is required for DNA replication and repair to take place, and inhibition of thymidine synthase is thus harmful to proliferating cells. Indeed, most of the small molecules in the network are drugs used for chemotherapy.